DemocracyNZ brings together a diverse range of Kiwis with real life and business experience. We come together from across the political spectrum, to represent you. We launched in March 2022, and we stand for freedom, for families, and for farming and rural New Zealand. We stand with you. 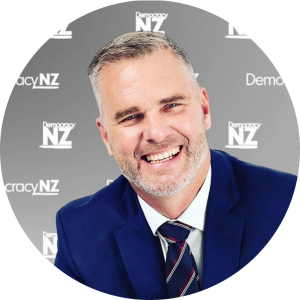 Northland is home for Matt. A farmer for more than 30 years, Matt also comes with a wide range of experience as a detective, business owner, and most recently, the MP for Northland from 2017-2020. All Matt's roles - whether in the Police, as a volunteer firefighter, rugby referee, or in politics (to name a few), have involved service to the community.

Politics is about people, and seeing the division and erosion of democracy in New Zealand, Matt felt it necessary to stand up and form a political party, based on our fundamental democratic and Kiwi principles. There is a significant proportion of Kiwis who feel politically homeless due to the lack of true opposition in the current political landscape. Politics requires courage - and that is often standing up against the status quo and speaking up for what is right - such as standing up against blatant breaches of our democratic rights. With a proven track record as an MP who cares, and a pragmatic approach to dealing with tricky issues – Matt is well-equipped to represent those whose voices have not been heard, and getting our country back on track. 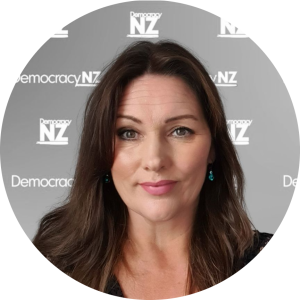 Lee Smith has been confirmed as the DemocracyNZ candidate for the Taranaki-King Country electorate.

Lee Smith has lived in the King Country, for more than 20 years, and over that time has run a successful local business. She was born and raised in Taranaki. Lee’s father was a dairy farmer. Lee credits her parents for instilling in Lee a passion for farming and an unwavering drive and commitment to advocate for the rural sector. She is a wife, a mother of six and a grandmother, and in between supporting her children’s sports teams and participating in community activities, Lee is an avid gardener. Family is her number one priority.

Lee joined DemocracyNZ after becoming increasingly concerned about the downward trajectory of New Zealand’s economy and social cohesion under this Labour Government. 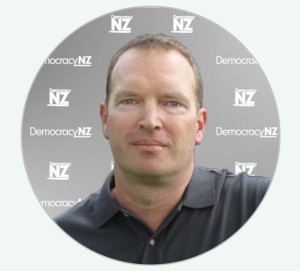 Steve is a farming advocate and climate emissions expert. Based in Eureka, Waikato, Steve manages a dairy farm and has also worked as an agricultural and environmental consultant. Steve was the spokesperson on carbon emissions for Groundswell because of his committed advocacy for the rural sector and reputation for being a straight talker. Steve has an agricultural science degree from Lincoln University, as well as a sound understanding of farming.

Steve's commitment to rural New Zealand and growing concern over Labour and National’s climate policies were what drove him to reach out to DemocracyNZ and ultimately seek the Waikato nomination. He understands why many regulations are unworkable, which has underpinned his political growth.

“Our farming sector and rural communities are under threat from the climate agenda this Labour government is inflicting on our country. I am also deeply concerned that the opposition parties in Parliament won’t prevent unrealistic climate policies from destroying our way of life. The National Party speaks with a forked tongue – on the one hand it says it stands with farmers, while on the other it maintains policies that will still destroy farming communities, just at a slower rate. DemocracyNZ won’t sell out our farmers. We will end the carbon emissions madness,” Steve said.

Our team is growing!

We will continue to carry out candidate selection over the coming months in the lead-up to the election. If you have an interest in politics and would like to put your name forward for candidacy, please get in touch on matt.king@democracynz.org

Danny comes with vast political, business, and community experience – having been a beef and dairy farmer in Northland, a Justice of the Peace, and has also served on several boards. Danny received the New Zealand Commemoration medal for services to agriculture, particularly in the veterinary field.

Danny was a volunteer ambulance officer for six years, holding a National Diploma in Ambulance practice as an Emergency Medical Technician. Danny has always been politically active, and after feeling immense disappointment with the current centre-right parties in Parliament due to their lack of opposition to the Labour-led Govt; he decided to support DemocracyNZ – to provide a true alternative to the current political landscape. Danny believes that the core values and purpose of DemocracyNZ resonates with Kiwis – the values of freedom, equality, and the New Zealand Bill of Rights. 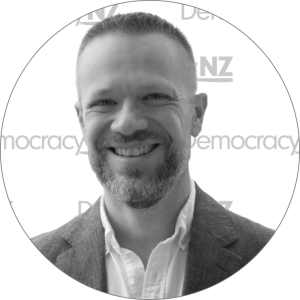 Greg is a medical doctor and retired military officer, with a keen interest in music. Greg joined DemocracyNZ after witnessing the virtually unopposed destruction of the rights of New Zealanders on the pretext of public health, the economic devastation caused by lockdowns and border closures, and the social harms of masking and vaccine mandates.

Recent times have shown us how fragile democracy can be, and how none of the political parties currently in Parliament during the 2020-23 term have stood up against what has been a complete breach of democracy. Greg joined DemocracyNZ because it is built on the solid foundation of everyday Kiwis - it is a Party that is built on democracy. He believes that the success of DemocracyNZ at the next election is critically important for the future of the country, that the imperious political class has had its day, and that Kiwis should be free to live without government overreach. 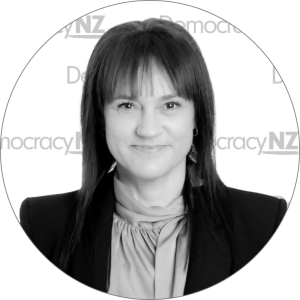 Tania-Lee is a born and bred Aucklander. She has owned, co-owned, and operated small businesses in New Zealand and overseas, including Qatar, the UK and Fiji. This first-hand experience entrenches the critical place small-to-medium business has in New Zealand.
Tania-Lee’s off-shore experience has given her an in-depth understanding of different cultures and religions, including sensitive issues around social status, social segregation, and gender inequality. She has extraordinary passion for New Zealand’s democracy, free speech, freedom of choice, and property rights - which are her key drivers for joining DemocracyNZ. It is time to rebuild New Zealand and our democracy.