New Zealand’s valuable farmland is being sold to wealthy multi-national overseas companies for pine tree farming to count towards their international ‘climate change’ obligations, leaving our agricultural sector at the mercy of the carbon market, DemocracyNZ said today.

DemocracyNZ officially launches its “Save the Stations” Campaign today ahead of the biggest farming event on the annual calendar – Fieldays at Mystery Creek in Hamilton (30 Nov – 3 Dec).

Leader Matt King and the party’s climate change spokesperson, Steve Cranston, say it’s a travesty that majestic farms, like Mangaohane Station in Hawkes Bay, are being eyed-up by companies such as Swedish furniture manufacturer IKEA and used for growing pine forests to offset that company’s carbon footprint.

“Not only are we losing valuable, productive farmland that could be used to grow a whole range of agricultural products for export earnings, but the carbon credits generated will go towards overseas owners to claim the carbon credit,” Matt says.

“The government’s current approach is deeply flawed, and our iconic, majestic stations have become a carbon emissions target for wealthy overseas and local companies. We are urging all Kiwis to sign our petition to stop these farms from going under the hammer and being lost to us all.”

Steve Cranston says the situation is yet another kick in the guts for the rural communities still reeling from the Labour Government’s announcement that Kiwi farmers will be the only farmers in the world to pay a tax on livestock emissions.

Labour’s policy will essentially see our agricultural sector, the largest export earner for the country, forced to cut production by over a fifth to meet the government’s climate change vanity project.

“We need to think very clearly about the future of our country. We are being asked to put the brakes on our economy and put the knife into our rural communities while our major trading partners talk the talk but don’t walk the walk.

“We need to end out-of-control carbon farming before it ends rural New Zealand. Labour wants to sacrifice our economy on the altar of climate change ideology,” Steve says.

Kiwis can help prevent farms from falling prey to wealthy companies such as IKEA by signing DemocracyNZ’s “Save The Stations” campaign before our farmland is turned into a sea of pine trees for offshore carbon credits.

“Pine trees are not suited to long term carbon storage,” says Steve, who manages a dairy farm in Eureka, Waikato, and is an expert on carbon emissions. Steve was the Groundswell spokesperson for the issue.

If elected, DemocracyNZ will work to ensure productive pine plantations can receive credits for carbon stored in wood products if processed in New Zealand. This would promote a shift back to harvested rather than ‘shut the gate’ forestry. The party further promotes the use of native trees for carbon storage with changes to ETS settings.

“The carbon farming business model is a house of cards that could collapse at any moment,” Steve added. “Any companies thinking about taking part in the slow destruction of rural New Zealand should do so at their own risk; any change in carbon price settings could make carbon farming operations unviable. But the government is not telling carbon farmers how much of a risk that is.”

Carbon farming is not part of the productive economy and relies entirely on government policy to sustain itself. “Urging farmers to swap productive farmland for planting trees to meet international climate change targets is a proposal that will destroy the our agricultural industry economically and cause rural communities dependent on this industry to stagnate and die.”

“Farmers need to ask themselves will they be able to afford it when the price of carbon reaches $20 per tonne? DemocracyNZ will work to peg the New Zealand carbon price to our top five trading partners, thereby allowing Kiwis to remain competitive on the world market. Kiwi’s will not continue to accept paying 5-10 times or more for carbon credits; change is inevitable,” Steve says. 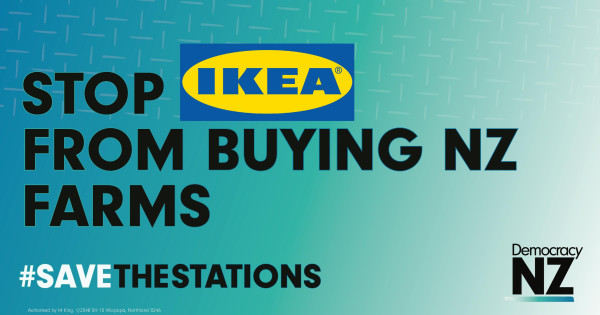 Our 2023 roadshow dates!
Royal Commission of Inquiry a whitewash
We stand with baby Will
Fieldays important for economy
The future ain't pine